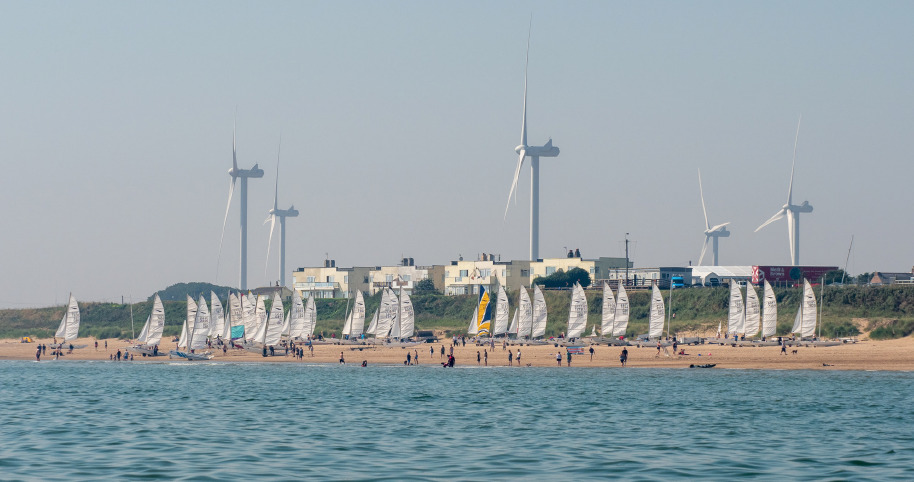 Three crews from the Royal Yorkshire Yacht Club Matt and Jakob Exon, Joe and Harriet Franks Mike and Imani Gomme and with a further members Alyesha Monkman and Ellis Stonehouse crewing for other clubs.

The event was held at the Royal Varuna Yacht Club from 14th to 22 February 2019. The catamarans were loaded into containers well before Christmas and were eagerly tracked as they travelled almost halfway across the world. 51 crews from 13 Nations would be competing for the championships.

The first day was marked by patchy winds rising from not very much to almost 15 knots by the end of the race. Nevertheless, the sun was shining, and the skies were blue. It was a slow start for the Bridlington sailors with Mike and Imani leading the way down in 15th. Alyesha crewing for Dan Norman (Isle of Sheppy) who were defending their 2018 title were in 5th.

Day 2 started with a strong 18th knot wind and clear blue skies. Dan and Alyeshia won the 2nd of the days races moving up the leader board

Day 3 another day in paradise 17 knot winds and clear skies. Mat and Jakob had a great day with a 1st and 6th with Dan and Alyeshia continuing with consistent performances.

Day 5 the final day, winds 10-14 knots and perfect conditions. 4 points separated 3rd, 4th and 5th places. Dan Norman and Alyeshia gained their 3rd place with a win in the final race of the event. 3 wins, 1 second and 2 thirds secured their place. Matt and Jakob were 10th overall with 2 wins and 2 thirds, Joe and Harriet were 24th , Mike and Imani 28th. Ellis Stonehouse crewing for Kenny Watson was 12th.

Overall a great event with some fantastic hospitality.

The RYYC sailors have had a busy and successful, season lead by the Dart 18's, culminating with the Royal Yorkshire Yacht Club becoming the UK's Top Club in the UK Dart 18 National Series 1st amongst over 18 competing clubs. Lead by series winner Joe Franks accompanied by his daughter Harriet as crew with Jay Round second and Mike Gomme eighth. Des Barnes fourteenth and Matt Exon nineteenth were also in the top twenty with Jonny Williams finishing twenty third out of eightyseven crews. The series was raced over seven weekends across the country with the top four results counting. This was a great success for the club showing the depth of talent across the crews.

The year started with the National Inland Championships. The Dart 18 sailors had three members in the top six places at the Inland National Championships at Datchet. Matt Exon was an excellent second, Mike Gomme fourth and Rear Commodore Joe Franks sixth great result for the RYYC and a taste of the success to come.

Joe Franks, Des Barnes and Mike Gomme all headed North to the Scottish Championships held at the Royal Tay Yacht Club. With two races to go Mike was in 1st place but slipped back to 2nd at the end, with Joe in 4th and Des in 6th. Another great result.

These were held at Worthing Sailing Club over the weekend of 21st August. 55 Dart 18s competed but there was only a small turnout from the RYYC. Rear Commodore Joe Franks finishing back in 18th place. The RYYC tradition was maintained by his step daughter Alysha Monkman acting as crew for Dan Norman of Worthing Sailing Club finishing in third place.

Further local success from the RYYC was gained by Chris Goymer and Paul Wiseman winning their class, again in a Dart 18, in the 60th Round Sheppey Race, part of the Allen Endurance Series.

Thus we have a new Champion within the club! Many congratulations to Joe and Harriet Franks for becoming the 2018 Dart 18 2018 Series Champions, with Jay Round and Sara Stones in 2nd place. The series took place over seven weekends encompassing Dee Sailing Club, the Inland Championships at Datchet Water, Snettisham, Bridlington, Parkstone, Mumbles and Whitstable. Joe and Harriet made it to all the events finishing with just 17 and won by a margin from fellow RYYC sailor Jay Round who had 25.

The series started at Dee sailing club with Jay Round in 3rd place and Joe Franks starting his campaign in 5th.

The second was the Inland Championships covered earlier.

The third round at Snettisham saw Mike Gomme taking second, Jay Round third and Joe Franks fourth. It's really good to see such national success from the RYYC. The next round is being held at Blyth Park, Bridlington where our team will have home advantage.

The RYYC hosted round 4 of the Dart 18 GP race series. Over 25 catamarans took part with competitors travelling from across the country. I think the team from Cornwall travelled furthest. The weekend was a tremendous success and the sailing competitive. The local sailors had their work cut out with Matt and Jakob Exon taking 3rd overall. Jay Round and Sara Stones were 8th, Joe and Harriet Franks 10th, Des and Finoula Barnes 11th, Jonny and Phil Williams 18th, Mike and Imani Gomme 19th with Steve Woodward 25th. It was great to see so many boats out in the bay.

This left Joe Franks still leading the Dart championships with Jay Round second and Mike Gomme 6th from over 50 boats.

The fifth round at Parkstone and was uneventful for the RYYC sailors.

Des and Fionnuala Barnes won the GP6 round of the Dart 18 championships at the Mumbles Sailing Club; followed closely in second place by series leader Joe Franks with Ellis Stonehouse as crew. It was a wet a very windy weekend with some very competitive racing. Six races were held over the weekend with Des and Fionnuala winning three of them. These were their first ever GP wins! On the last race Joe almost secured the series win by coming second if only the third place team hadn't missed the finishing line! This allowed Mark Ronson to finish third keeping the pressure on Joe.

The final round was held at Whitstable with Alesha Monkman crewing Dan Norman to 2nd. All Joe had to do was to ensure his rivals didn't win! Some very competitive match racing and resulted in some tactical racing! Joe maintained his Championship lead and won the series.

It's been an outstanding year for the Dart team at the RYYC Blyth Park section with Joe and Harriet Franks winning the National Travellers Championship, with Jay Round second overall. This more than made up for the challenging showing on home seas in Bridlington where the locals struggled!