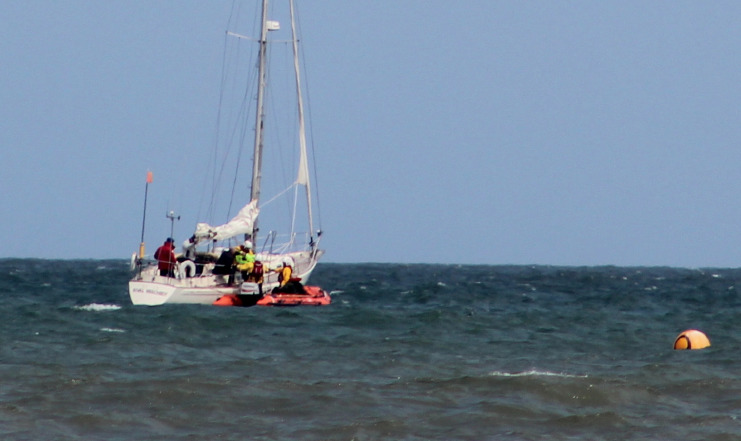 Three yachts started the 2019 Dowsing Race, with Jeff Preece's Cornelia C joining regulars Enigma (Bob Wallace and team) and Rival Mischief (Crispin Blyth and team). The wind was in the SE of course, giving a beat all the way to the Dowsing Buoy.

After a gentle start, the wind increased slowly during the day, settling in to mainly SE 4, gusting 5. Rival Mischief decided to try the opposite of the year before and kept close in to the land, arriving right on the beach at Withernsea before finally heading out to sea. Enigma chose the opposite and went well out with Cornelia C keeping more to the middle of the course. Late in the afternoon, Jeff called Rival Mischief by VHF to say that the crew had mutinied with the constant slog into the wind and an uncomfortable sea and that Cornelia C was retiring and heading home.

The crew on Rival Mischief were heartened to see Enigma's stern light turn green as they rounded the Dowsing about midnight, which meant that we were close enough to be well ahead on corrected time at that point. After a long day beating into a constant sea, this showed what the Rival 36 was built for.

However, within an hour of Rival Mischief rounding too, the conditions changed completely leaving a heavy yacht with no wind in a swell, whilst the light racing Enigma disappeared out of sight, having got the last laugh. The skipper turned in for an hour or two, but only to find crew Fred Ingham and David Bowes rattling and banging around on deck with sails and poles trying to gain half a knot.

By the time the Canada Wreck buoy was rounded in the early morning, Enigma was long gone; but after a frustrating night of little wind we had a lovely reach all the way back up the coast in the morning.

As we neared no 9 on our way to finish, David on the helm spotted a casualty in the water, being circled by his own fast running outboard and dinghy. From a distance it had looked like kids playing, but very quickly it became apparent that it was serious. We rolled the genoa and sailed up under main only, without engine as there was plenty of wind. We managed to get hold of the casualty and even though we had heeled ourselves towards him to make the job easier, the SE chop made it very hard to keep hold of him as Rival Mischief rose and fell with the sea.

We got him aboard on the first attempt, but cold and shocked; once wrapped in a sleeping bag and with a hat on, we called the Coastguard to ask them to request the inshore lifeboat to recover the casualty from us, as by now it was low water and we could do no more. We then tried to disable the runaway outboard, which was bashing into us and raging around. After two attempts to catch it with the boathook, it was apparent that this would lead to another accident, as we didn't have the speed to deal with it. We called the Coastguard again and asked for the now approaching RNLI rib to disable it.

It was only a couple of hours later, anchored right in under the cricket club at Sewerby trying to get a bit of shelter, that we realised that we had never actually finished the race; we were later given second place on redress. It is not easy to recover a casualty from the water onto a yacht with reasonably high topsides in an Easterly in Bridlington Bay; all credit to David and Fred for their calm efficiency. The one light note was when we asked if he took milk and sugar with tea, to which he replied "I no longer care"!

Back to the race; well done to Enigma on their win again, they always make the tide back in on the Sunday morning!