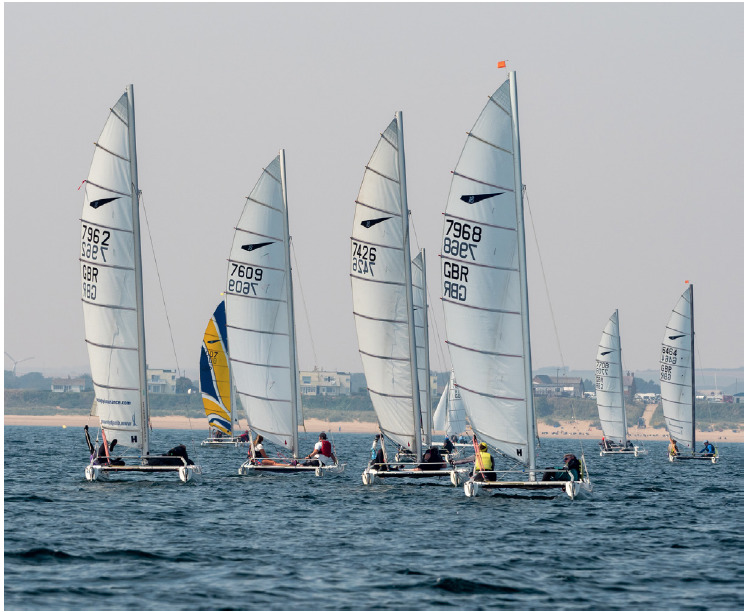 The 2019 sailing season was hampered by the high winds and rough seas leaving over a ¼ of the racing season not able to be raced and a weekly job of either putting the marks back on station or making up and putting new marks in ready for the next race.

I would like to express my thanks and the members thanks to Tim Rix, Mark Eggleston, Dennis Bailey, Jordan Harrison, Steve Caines, Jeff Preece, Rob Michell, Steve Wood, Kevin Porter, Harry Pickering and Kevin Travis for placing, removing the pier head hut and putting out and bringing in both the harbour and dinghy racing marks. I would like to also express our thanks to Gerard Dyson for putting together the 2020 sailing program for a second year.

Without members giving up their time to volunteer and help within the club, we would not be able to achieve the high standards the RYYC stands for. We look forward to seeing new faces volunteering next year.

The 2019 sailing season saw three new cruisers Sting owned and sailed by Gerard Dyson and Richard Delves, Diva owned and sailed by Tina and Mike Kaye and Lazy Jack owned and raced by Sarah and Jon Peacock joining our fleet. The cruiser fleet continued to race under the IRC rating with Whispy opting to join the BHS class. The IRC fleet was dominated by the very close racing between Diva and Sting resulting in the two of them, clearing up the trophies for the IRC class.

The contessa fleet was short of competitor this year with the season starting with True Blue and Halycon Days racing but unfortunately due to illness Halycon Days had to stand down for a couple of series leaving True Blue to clean up the trophies. The YOD fleet carried on with their mini-series weekends, seeing Ditherumpop the first YOD onto the water with her new owner Christian Brash. The racing was still close between the same three boats this year, Iolanthe, Mona and Blackie, with Mona coming sailing through to take the majority of the trophies. It was nice to see Patience back on the water at regatta with her younger, enthusiastic crew of Robbie Rix, Charlotte and William Jones.

This year's Dowsing race started with three competitors, unfortunately seeing Jeff Preece on Cornelia C retiring, Crispin Blyth on Rival Mischief carrying out a man over board rescue before finishing under redress and Bob Wallace and Tim Goodwill on Enigma making the Sunday morning tide to be awarded 1st place.

Race control again this year has been difficult to cover, leaving the sailing group to make a decision that every boat entering for racing in 2020 will have to cover two dates of pier head duties as condition of race entry. The 2019 sailing season saw Jim Evans hang up his binoculars and retire from the pier hut, on behalf of all the members I would like to thank Jim for his work at the pier head and wish him all the best.

On behalf of the sailing group we look forward to seeing you all on the water, hoping for fair winds and calm blue seas for the 2020 sailing season.