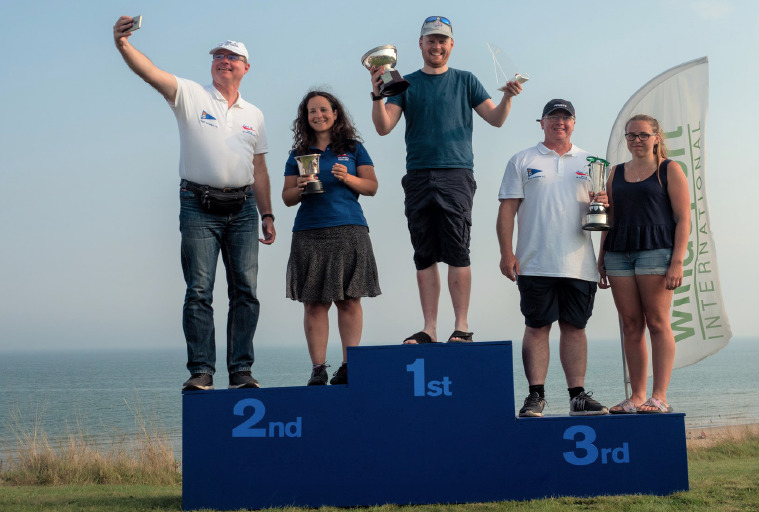 This year's 2019 Dart National Championships, 24th to 27th August, was hosted at the Royal Yorkshire Yacht Club in the stunning Bridlington Bay. Fifty two Dart 18s entered from across the UK including two teams from France and Italy. The majority of the Darts were sailed two-up with a varied combination of family members/partners/borrowed crews. There were eight singlehanded entries without the jib, six of which finished in the top twenty.

Boats arriving on Thursday and Friday were welcomed by club members and directed to parking and camping areas and the fabulous marquee gin bar, already up and running! The Windsport support team was set up prior to scrutineering and supported the boats throughout the event - offering a repair service and selling spares. Windsport's Brian Phipps ran a three hour race training session on Friday afternoon for the less experienced competitors.

The weather throughout the event was hot and sunny, almost unheard of on an August Bank Holiday! Race Day on Saturday had a good wind 3 - 4 and both races were won by Rob Garka and Fi Goegebeur from Worthing S.C. As soon as the racing finished free Pirate Cider was served at the sponsor's trailer (Windsport), when that finally ran out it was off to the event marquee for a BBQ, Gin Bar and 80's Dad Dancing at the Disco.

Sunday: hot with a light wind but still the Race Officer Tony Saltonstall managed to get two races in; race three was won by David Lloyd and Joanna Trafford, race four by Andy Kelley and Sue Nelson. Both boats were from Stokes Bay S.C. That evening's entertainment started with a fish'n'chips supper followed by a Sponsor Night with spot prizes supplied by the different sponsors. The big prize of a new jib was won by David 'Lucky' Lloyd in a game of knock out coin tossing. The entertainment continued with live music from Zebra, who performed on a Neill & Brown 40' trailer stage accompanied by a full light show.

Monday: unfortunately, even less wind but the sun was hot. Despite his best efforts, the Race Officer had to abandon the race five as the lead boats ran out of time just before the windward mark and racing was cancelled for the rest of the day. In the evening, competitors decamped to the main yacht club building in the center of Bridlington for a superb curry or pasta meal; the homemade chilli sauce was to die for (and some did). Everyone then boarded the Yorkshire Belle cruise boat for a two hour champagne fuelled trip around the spectacular Flamborough Head and sea bird colonies.